How this research came about:
While teaching pregnant women the Tupler Technique® to prepare them for labor, I discovered that my program could make their diastasis smaller as their bellies got larger during my six-week program! This was important because a large diastasis can put a pregnant woman at risk for a C-section.  There was no research on the effects of exercise on diastasis recti so I contacted Cynthia Chiarello at Columbia University Program in Physical Therapy and asked her if she wanted to do a study about the Tupler Technique® Program and its effect on diastasis recti during pregnancy. She agreed. The study was completed and the results did show (as I knew it would) that the pregnant women that did my program had a smaller diastasis than the control group. One of the students from Columbia wrote me a letter that said, "I am writing you to you on behalf of the Columbia University students who initiated the study on the effects of your exercise program on diastasis recti abdominis in pregnant women. We have decided to submit our study for publication. In order for our submission to be completed, we will need to include a section on the specific exercises that are performed in your "A" class. We will need your help to adequately describe these exercises."  The article was published and to my disappointment, the Tupler Technique® was not named as you will see when you read the published study.  Click here to view the original Columbia Study.

Ms. Falzone, Ms. McCaslin, Ms. Patel, and Ms. Ulery were enrolled in the Master of Science Degree in Physical Therapy at Columbia University at the time data was collected for this study.

This research was presented at Combined Sections Meeting of the APTA, Boston, MA, 2002 and received the 2002 Research Award from the Section on Women's Health.

Approvals: This project was reviewed and approved by the Columbia University and Columbia Presbyterian Institutional Review Board, #9906.

Background: Diastasis Recti Abdominis (DRA), a separation of the 2 bellies of the rectus abdominis at the linea alba, may occur in more than half of all pregnancies. Due to hormonal changes and a growing uterus, the abdominal muscles become over‐stretched and weak, compromising posture, trunk stability, respiration, trunk motion, and vaginal delivery. Exercise to strengthen the abdominal musculature during pregnancy may affect the presence and size of DRA, however, no research has specifically examined this relationship.

Purpose: The purpose of this project was to determine the effect of the Tupler Technique® abdominal strengthening exercise program on the presence and size of DRA in pregnant women.

Methods: Subjects were comprised of 8 pregnant women participating in the Tupler Technique® abdominal exercise program and 10 non‐exercising pregnant women. Diastasis recti abdominis was measured using a digital caliper at 3 marked sites along the midline of each subject's abdomen: 4.5 cm above the umbilicus, at the umbilicus, and 4.5 cm below the umbilicus. Two measurements were taken at each site, and the average was used for statistical analyses. Descriptive statistics were generated, and independent t‐tests were performed on each subject characteristic. An analysis of covariance was computed with the number of previous pregnancies as the covariate to control for the difference between the subject groups.

Conclusions: The occurrence and size of DRA are much greater in non‐exercising pregnant women than in pregnant women doing the  Tupler Technique® Program. Because of the integral role the abdominal muscles play in functional activities we recommend examining pregnant and postpartum women for the presence of DRA. 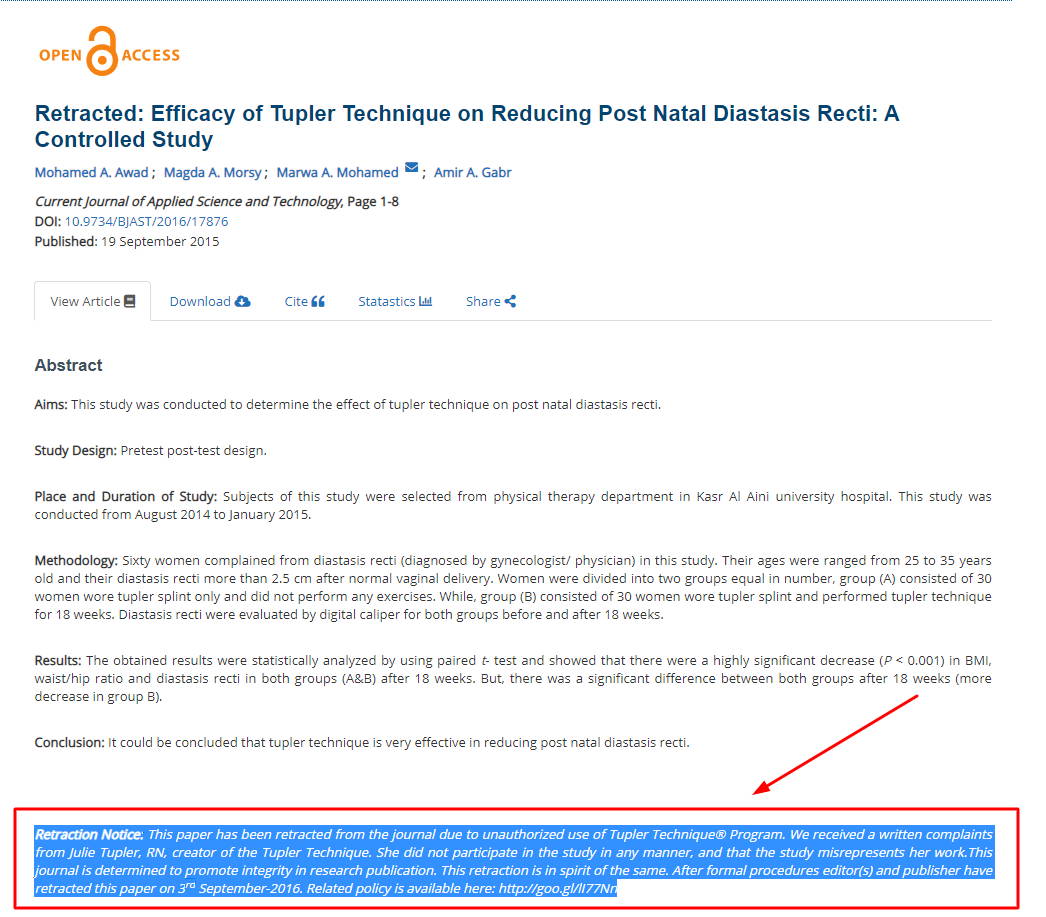